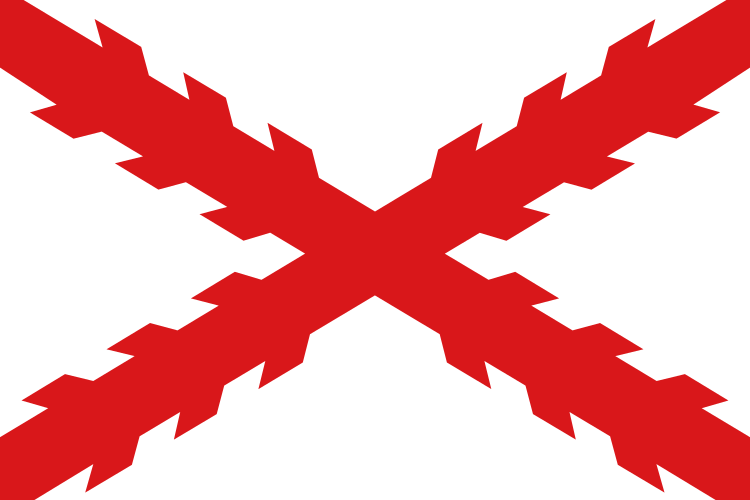 The Cross of Burgundy (Spanish: Cruz de Borgoña, Cruz de San Andrés), a form of St. Andrew's cross, was first used in the 15th century as an emblem by the Valois Dukes of Burgundy, who ruled a large part of eastern Franceand the Low Countries as effectively an independent state. The Duchy of Burgundy was inherited by the House of Habsburg on the extinction of the Valois ducal line. The emblem was then assumed by the monarchs of Spain as a result of the Habsburgs bringing together, in the early 16th century, their Burgundian inheritance with the other extensive possessions they inherited throughout Europe and the Americas, including the crowns of Castile and Aragon, where the cross got a global impact, being found nowadays in different continents.
The Spanish monarchs continued to use it in their own arms after the Burgundian house was part of the Spanish Crown, and even after due to the extint of the burgundy house. From 1506 to 1701 it was used by Spain as a naval ensign, and up to 1843 as the land battle flag, and still appears on regimental colours, badges, shoulder patches and company guidons. The emblem also continues to be used in a variety of contexts in a number of European countries and in the Americas, reflecting both the extent of Valois Burgundy and the former Habsburg territories.

The banner strictly speaking dates back to the early 15th century, when the supporters of the Duke of Burgundy adopted the badge to show allegiance in the Armagnac–Burgundian Civil War. It represents the cross on which Andrew the Apostle was crucified. The design is a red saltire resembling two crossed, roughly-pruned (knotted) branches, on a white field. In heraldic language, it may be blazoned argent, a saltire ragulée(or raguly) gules.
Pedro de Ayala, writing in the 1490s, claims it was first adopted by a previous Duke of Burgundy to honour his Scottish soldiers. This must be a reference to the Scottish soldiers recruited by John the Fearless in the first years of the fifteenth century, led by the Earl of Mar and Earl of Douglas.[original research?] However, earlier chronicle accounts and archaeological finds of heraldic badges from Paris indicate widespread adoption dates from 1411 in the context of factional warfare in the city and that its origins are more likely to relate to the fact that St. Andrew was the patron saint of the dukes of Burgundy[1] 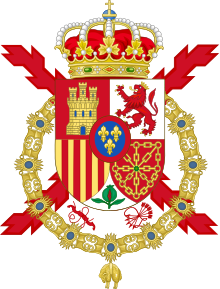 Coat of arms of Juan Carlos I, King of Spain (1975–2014), with the Cross of Burgundy as a supporter.
The year 1506 should be considered its theoretical earliest use in Spain (that is, it made appearance on the standards carried by Philip the Handsome's Burgundian life guards), although about 1525 might be perhaps a more likely estimate. Philip, after his marriage to Joanna of Castile, became the first Habsburg King of Spain and used the Cross of Burgundy as an emblem as it was the symbol of the house of his mother, Mary of Burgundy. From the time of Philip and Joanna's son, Emperor Charles V (King Charles I of Spain), different armies within his empire used the flag with the Cross of Burgundy over different fields. Nevertheless, the official field was still white. The Spanish monarchs – the Habsburgs and their successors' the House of Bourbon – continued to use the Cross of Burgundy in various forms, including as a supporter to the Royal Coat of Arms.[2] From the time of the Bourbon king Philip V (1700–1746), it seems that the Spanish naval ensign was white and bore a royal coat of arms in the centre, though it is said that the Burgundian flag was still flown as a jack ensign, that is, as a secondary flag, until Charles III introduced his new red-yellow-red naval ensign in 1785. It also remained in use in Spain's overseas empire (see #Overseas Empire of Spain below).
The flag eventually came to be adopted by the Carlists, a traditionalist-legitimist movement which fought three wars of succession against Isabella II of Spain, claiming the throne of Spain for Carlos, who would have been the legal heir under the Salic Law, which had been controversially abolished by Ferdinand VII. In the First Carlist War (1833–1840) the Burgundian banner, however, was a banner of the Regent Queen's standing Army rather than Carlist. After 1843 the red Burgundian saltire kept on appearing on the new brand red-yellow army flag under a four-quartered Castilian and Leonese coat of arms on the central yellow fess. Eventually, under the leadership of Manuel Fal Condé, the Cross of Burgundy became the Carlist badge in 1934.

Examples of use of the emblem

Spanish Cross of Burgundy, with crown, firesteel, and Golden Fleece

Cross of Burgundy alongside Puerto Rico and U.S. flags at Fort San Cristóbal
The Cross of Burgundy has appeared throughout its history, and continues to appear at present. Due to the impact of Spanish Empire as the first global powerhorse across the world, numerous flags and coats of arms of bodies, in various colours and in combination with other symbols can be found in old spanish domains. Users mostly have some direct or indirect relation to the historical Burgundy, though such connection can be very vague and lost in the mists of time. Most of them has direct link with Spanish Empire where this symbol got a global impact.

In Belgium and the Austrian Netherlands

In South and Central America 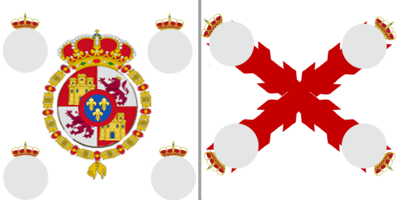 Banner of the foot regiments of the Spanish army: "Coronela" (King's Colour) with the Royal Crest of Spain (carried by the first battalion), and "Ordenanza" or "Batallona" (Battalion's Colour) with the Burgundian cross (carried by the second and third battalions); with four little coats-of-arms of the place for which it is named. If the battalions were merged by any reason, the Coronela and Batallona flags could be joined in a sole flag with the Royal Crest over the saltire. The flags with the Royal Crest of Ferdinand VII were used by the Spaniards in the Peninsular War and in the Spanish American wars of independence.
During the Spanish colonization of the Americas the Cross of Burgundy served as the flag of the Viceroyalties of the New World (Bandera de Ultramar)[5] and as a recurrent symbol in the flags of the Spanish armed forces[6] and the Spanish Navy.[7] Nations that were once part of the Spanish Empire consider "las aspas de Borgoña" to be a historical flag, particularly appropriate for museum exhibits and the remains of the massive harbor-defense fortifications built in the 17th-18th centuries. At both San Juan National Historic Site in Puerto Rico, and at Castillo de San Marcos National Monument in St. Augustine, Florida, the Cross of Burgundy is daily flown over the historic forts, built by Spain to defend their lines of communication between the territories of their New World empire. The flying of this flag reminds people today of the impact Spain and its military had on world history for over 400 years. It was also used by Spanish military forces.

In the United States[edit]