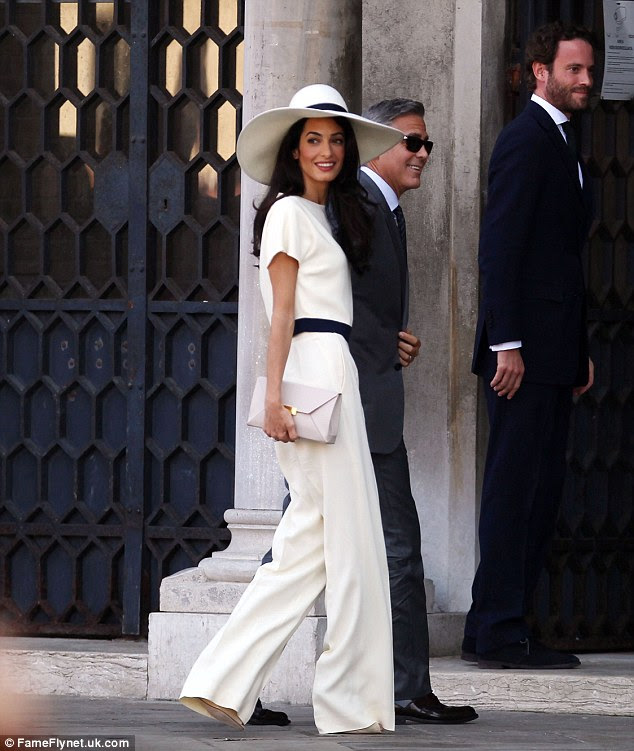 Amal Ramzi Alamuddin  (3 February 1978) is a London-based British-Lebanese lawyer, activist, and author. She is a barrister at Doughty Street Chambers, specialising in international law, criminal law, human rights, and extradition.[2] Her clients include Julian Assange, the founder of WikiLeaks, in his fight against extradition.[3] She has also represented the former prime minister of Ukraine, Yulia Tymoshenko.[4]

Alamuddin was born in Beirut, Lebanon, to father Ramzi Alamuddin, a retired professor of business studies at the American University of Beirut, who returned to Lebanon in 1991[5]and is from a prominent Lebanese Druze family,[6][7] and mother Bariaa (née Miknass) Alamuddin, foreign editor of the Pan-Arab newspaper al-Hayat,[1] who is a Sunni Muslim fromTripoli, Lebanon.[8][9] Alamuddin has three siblings - one sister, Tala, and two half-brothers, Samer and Ziad,[1] from her father's first marriage.[10]
During the 1980s, when the Lebanese Civil War was in full scale, Alamuddin's family left Lebanon for London and settled in Gerrards Cross.[11] She was two years old at the time.[1]
Alamuddin's father is from the town of Baakline,[12][13] a suburb of Beirut where many Lebanese Druze live.[1][14] Alamuddin's mother is from Tripoli, Lebanon, where a significant community of Lebanese Sunni Muslims live.[8][9]

Alamuddin attended Dr Challoner's High School, a girls' grammar school located in Little Chalfont, Buckinghamshire. She then studied at St. Hugh's College, Oxford, where she received an Exhibition scholarship[15] and the Shrigley Award.[16] In 2000, Alamuddin graduated with a Bachelor of Arts in Jurisprudence (Oxford's equivalent to the LLB)[17] from St. Hugh's College, Oxford.
The following year, in 2001, she entered New York University School of Law to study for the Master of Laws degree, where she was a clerk for the clerkships program at the International Court of Justice.[18] She received the Jack J. Katz Memorial Award for excellence in entertainment law.[19][20] For one semester while at NYU, she worked as a student law clerk at the United States Court of Appeals for the Second Circuit in the offices of Sonia Sotomayor, who is now on the Supreme Court of the United States.[21] In 2004, she worked at the International Court of Justice and was one of two NYU-sponsored clerks at the Court. She clerked under Judge Vladen S. Vereshchetin from Russia and Judge Nabil Elaraby from Egypt.[18][22]

Alamuddin worked at Sullivan & Cromwell in New York City for three years as part of the Criminal Defense and Investigations Group, which included the criminal probe of Enron and Arthur Andersen.[16][19]
She worked in the Office of the Prosecutor at the UN Special Tribunal for Lebanon and at the International Criminal Tribunal for the former Yugoslavia.[23] She has been involved in high-profile cases representing the state of Cambodia, the former Libyan intelligence chief Abdallah Al Senussi, Yulia Tymoshenko and Julian Assange, and is an adviser to the King of Bahrain in connection with the Bahrain Independent Commission of Inquiry headed by Professor M. Cherif Bassiouni.[19]
Alamuddin returned to the UK in 2010,[24] where she is a barrister in London (Bar of England & Wales, Inner Temple) at Doughty Street Chambers.[16]
In 2013, Alamuddin has been appointed to a number of United Nations commissions including as adviser to Special Envoy Kofi Annan on Syria and as Counsel to the 2013 Drone Inquiry by UN human rights rapporteur Ben Emmerson QC into the use of drones in counter-terrorism operations.[20][25][26]
In May 2014, Alamuddin met with Foreign Secretary William Hague and a group of leading female campaigners "to discuss how to drive forward international action to protect children in conflict zones from rape and sexual violence" before the June 2014 Global Summit to End Sexual Violence in Conflict in London, part of the Preventing Sexual Violence Initiative launched by the Foreign Secretary in 2012, which is aimed at strengthening international efforts to respond to sexual violence in conflict zones. Alamuddin is a member of the multidisciplinary Team of Experts established on behalf of the Foreign and Commonwealth Office.[27]
In August 2014, Alamuddin was selected for the UN's three-member commission to look into possible violations of the rules of war in Gaza during the Israel–Gaza conflict. She however said she was unable to accept the position. She stated "There are various reports published today stating that I have been appointed as one of three members of the UN Commission of Inquiry for Gaza. I am horrified by the situation in the occupied Gaza Strip, particularly the civilian casualties that have been caused, and strongly believe that there should be an independent investigation and accountability for crimes that have been committed."[28]
Alamuddin has lectured students on international criminal law at SOAS (University of London), The New School in New York City, The Hague Academy of International Law, and the University of North Carolina at Chapel Hill.[19]

Clooney in Venice, September 2014
Alamuddin is fluent in Arabic, English and French.[29][30] Alamuddin's father is Druze, a quasi-Muslim sect in Lebanon that is part of the Shia Islam denomination of Islam.[9][12][13][14][31]Alamuddin's mother is Sunni Muslim.[8][9]
Alamuddin became engaged to actor George Clooney on 28 April 2014.[26] Alamuddin and Clooney officially married on 29 September 2014 in at Venice's city hall (at Ca' Farsetti)[32] in Venice, Italy, following a star-studded wedding ceremony two days earlier, also[33] in Venice.[34][35][36] They were married by Clooney’s friend Walter Veltroni, the former mayor of Rome.[36][37] The wedding was widely reported in the media.[38]